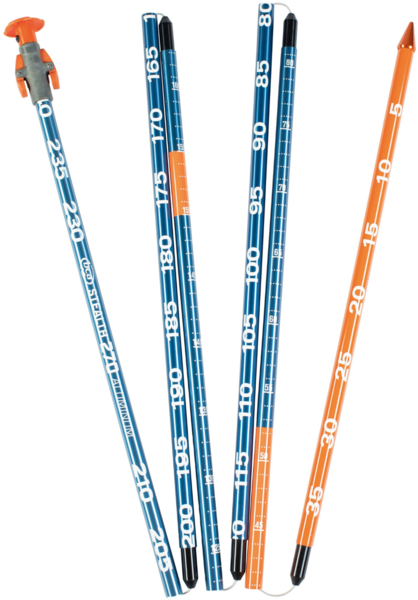 The BCA Stealth 270 avalanche probe features the easiest and fastest assembly on the market, with no loose cable to cause hangups.

The top segment stealthfully nests inside the next probe section, reducing the number of segments and size of the probe bundle when disassembled in your pack.

Equipped with laser-etched depth markings for measuring snowpack and/or victim depth to determine the dimensions of the excavation area before shoveling.

BCA Quick-Lock hardware allows for the best packability and deployment speed on the market. Stealth probes are built to last and save valuable seconds during an avalanche rescue when time matters.

How do you use an avalanche probe?

BCA recommends that everyone take an avalanche rescue course to learn how to properly use an avalanche probe. You can also watch our Probing 101 video to learn more. https://www.youtube.com/watch?v=-0_yDN5Drzw

What is the difference between an aluminum and a carbon probe?

How do I choose the appropriate probe length?

You should choose your probe length depending on the depth of your snowpack and the intended use. In a shallower Colorado snowpack, a Stealth 240 might be sufficient. If you live in an area with a deeper snowpack or travel to areas that have a deeper snowpack you should consider a longer probe. If your probe is intended for use on organized probe lines, consider a probe at least 300 cm long: this way you won't have to bend over repeatedly as you probe for many hours at a time. It is also important to make sure the collapsed length of your probe will fit inside the pack you are using.

What is the difference between laser-etched and painted depth markings?

Which BCA packs are the Stealth 240 and Stealth 270 compatible with?

The BCA Stealth 240 and Stealth 270 avalanche probe models are compatible with all BCA Stash backpacks and Float avalanche airbag models.

Which BCA packs are compatible with the Stealth 300 and Stealth 330?

Which BCA avalanche probes are compatible with the Float MtnPro Avalanche Airbag Vest?

All BCA avalanche probes, including the Stealth 300 and Stealth 330 are compatible with the designated tool compartment inside the main compartment of the Float MtnPro Vest.

This updated 101 video takes you through the pinpointing–or probing–stage of an avalanche rescue. BCA's Andy Wenberg illustrates the probing techniques used for companion rescue (when avalanche transceivers are used), spot probing (when no transceivers are used), and probe lines–usually performed by an organized rescue team. This is not a substitute for an avalanche class. Get educated before heading into the winter backcountry. For more educational resources, visit https://backcountryaccess.com/en-us/l...